“Forms in Nature” is an audiovisual meditation on humankind’s scientific achievements and the wonders of the natural world. The film celebrates how science deepens our connection to nature through study and curiosity, as well as the awe-inspiring beauty of our world.

Every scene represents an important scientific discovery, innovation, or topic relating to conservation. It starts with the beginning of a life on earth and continues to show the diversity of our planetary ecosystem, while also highlighting several landmark scientific achievements and some of our most ambitious efforts to learn more about our place in the universe.

The process for creating the film was very organic and collaborative, made with a team of just four people and with each person largely helping to influence and shape the final outcome of the project. The film is a great representation of both our ambitions as a studio and the way we love to work!

^ VISUAL INSPIRATION GATHERED AT THE BEGINNING OF THE PROJECT

KEVIN: Around the time I started working on concepts for this film, I had a lot of fragments of ideas bouncing around in my head regarding the importance of conserving our natural environment and also emphasizing the importance of careful scientific study for future generations. There was a particular idea that really stuck for me, which was a thought that science and nature are inseparably connected because all scientific discoveries happen by studying nature, and those studies of nature also teach us about how the world works and where we are in the universe. Thinking about those connections reminded me of being a kid in science class watching videos of the Space Shuttle taking off, or scientists exploring the depths of the ocean. It’s sort of a lifelong sense of awe & inspiration from the work of incredible scientists and also the startling beauty found all over the Earth. I wanted to find a way to bottle up that feeling in a sequence of images and animation. It felt like a very elusive thing to capture, and I spent a lot of months just drawing things which evoked that sense of inspiration for me, whether amazing inventions like particle colliders or beautiful animals like the Great Blue Heron. At some point I started to notice by accident that a lot of things I was drawing were circular in nature or had a circle somewhere within their makeup. I had been looking for some kind of theme or backbone to tie everything together to give the film a clear sense of consistency or progression, and I realized the circle could be a great graphic way to communicate the idea of cyclical feedback and connection between science and nature.

With this concept clearly in mind, I was able to start drawing lots of scenes which worked with a central circle motif, and eventually whittle those scenes down to my favorites and flesh them out into more detailed thumbnails and color keys. Those are what finally turned into the colorscript and also, essentially, the storyboard for the film.

Until the colorscript was completed, I was still unsure whether this would even work as a film idea. However, seeing all the scenes strung together I could see a clear idea behind it and decided to just go for it! At that time I introduced the concept to Stephane so that he could start thinking about how we could bring it all to life, and I also got in touch with the composer David Kamp. The music was incredibly central to making the concept work, and needed to capture the same sense of inspiration in sound that I was trying to capture visually. David immediately got the idea and started to create music sketches based on a 4-second structure that we could build the film around. I asked David to create something awe-inspiring, and that is exactly what he ended up doing. He also created a lush and lively soundscape for the film by sourcing sounds from his vast library of field recordings, as well as recording a lot of things specifically for the film such as the bees for which he visited a bee farm. 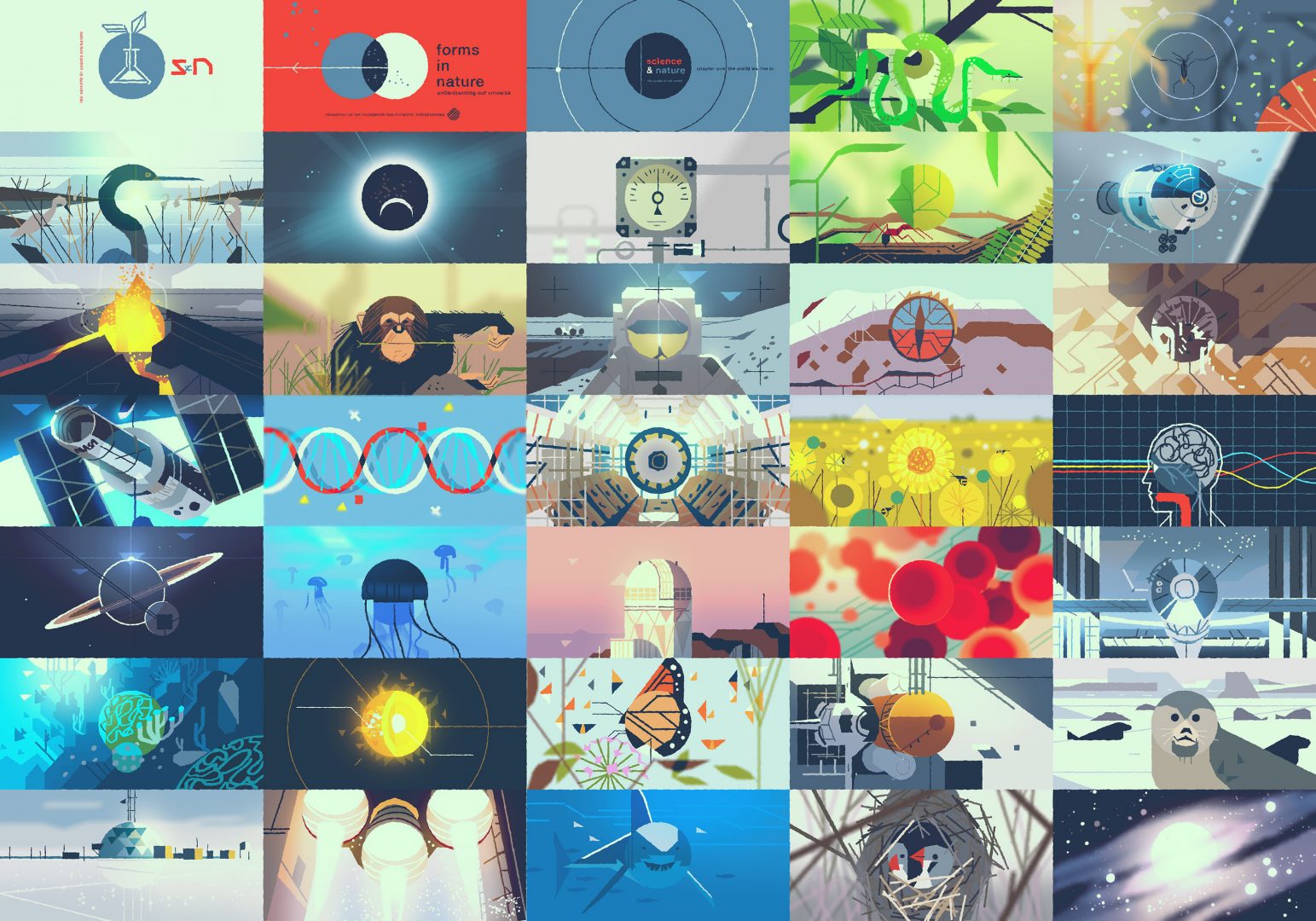 KEVIN: Because we wanted to have a static circle motif throughout the whole film, the first thing I did before starting any final paintings was to create a standard design template that I would use for every scene. The template was made out of a grid where everything was in multiples of 16 pixels for extra consistency. It also contained the central circle as well as a range of circles in other sizes that I could use to create other elements. Every piece of every scene is locked to this grid system which I think creates a sense of the underlying order and logic to everything in our world.

NELSON: When animating in any style there are rules both defined and implied by the design. How does this look vs how does this look when it moves? The more consistently these rules are established the more natural the relationship between design and animation, to the point where there isn’t distinction; it just exists. This was the primary goal of bringing these stylized animals to life, merging the rules of real life and graphic aesthetic.

The beauty was that this was an ambient story, something you don’t often get to do. Animals just being present, casually glancing at their surroundings, breathing. What I had was Kevin’s designs and live action reference. It was like combining two languages to see what they shared in common. The shapes Kevin used were the starting foundation, and I added to this vocabulary within the language’s limits based on nuances from life. Most poses and angles created were designs themselves, as if they would work as a still image on their own. In a sense, this created a living illustration.

I believe that’s what I love most about animation. The brain fills in the gaps, allowing true suspension of disbelief. Being given just a glimpse of something in motion, we can imagine it alive from all angles even if we never see them.

STÉPHANE: My favorite challenge in the compositing work that I do is in figuring out how to create natural and believable motion using interesting and stylized design. When I am given a new design to bring to life, I immediately begin to think of how I can bring as much life as possible to this element without breaking the design. For instance, the ripples on the surface of the water in the scene with the water strider were designed in a very abstract way, so I had to think of a way to bring that surface to life while also retaining the intention of the design.

A lot of planning and thought goes into every scene before I even begin to work. I like to dig deep into the layers of each Photoshop file to see how it is structured, and that helps be get inspired about how to reproduce some of the effects in the scene and even push it a bit further than the original concept. The illustration will also give me a vague idea of what kind of camera move I might be able to try, or what elements I might be able to tweak or skew to bring additional depth.

For scenes that involve a lot of faking of 3D depth, I actually create the depth illusion entirely by hand just by moving elements around and using my intuition for what would feel right. If these scenes were rebuilt in accurate 3D it could look completely different in real perspective, but my general philosophy is always that it doesn’t necessarily need to be right, it just needs to feel right.

One scene I particularly enjoyed on this project is the one with the leaf-cutter ant. I decided right away when I saw the illustration that I wanted to lock the camera to the leaf so that it wouldn’t move, but the rest of the world would move around it. Finding a way to surprise the audience and give them something unexpected is one of the things I enjoy most.