For Volta-X, a strategy role-playing game for the Nintendo Switch and PC, Chromosphere was enlisted to produce the game’s energetic opening cinematic. In the game, players face off with opponents, battling giant robots while guiding your team in robot upgrades and repairs, with the goal of becoming The World Volta Association’s world champion!

Our cinematic draws inspiration from classic mecha anime as well as the game’s appealing characters and sensibility. Our goal was to create a piece both nostalgic and future thinking—but more importantly, something exciting and ready for battle!

EUSONG (Director): For this project, most of our inspirations came from 70s and 80s anime, especially the mecha genre. I grew up reading Tetsujin 28-Go and playing Super Robot Wars. The characters in this film especially relate to the chibi versions of the realistic Gundam in Super Robot Wars. On top of that, there is a rounded muscle man impression of Tetsujin, unlike other mecha characters who are angular and detailed. I think Mazinga or Getta Robo inspirations are also mixed in with the other well-known references.

We started from there and then began adding more modern details from the 90s and 2000s. The fancy transformation sequence and complicated control panels are definitely influenced by that era of transformer robots and hero animes.

On the color side, we went for more punchy and modern anime-like color schemes. Since the design itself had old-school influences, it seemed appropriate to balance the look out this way. We didn’t want anything to feel like a grey futuristic lab or a military-like battle. It had to be super fun, heart-pumping, and victorious. Taking such a vibrant approach to the color creates a tough challenge of making sure everything is still reading easily. Our art director Sylvia Liu did an incredible job with her colorscript. She managed to infuse neon saturated colors without losing any silhouette of characters by contrasting hot and cold colors. That way, even though the animation is pretty dynamic, everything is read clearly. 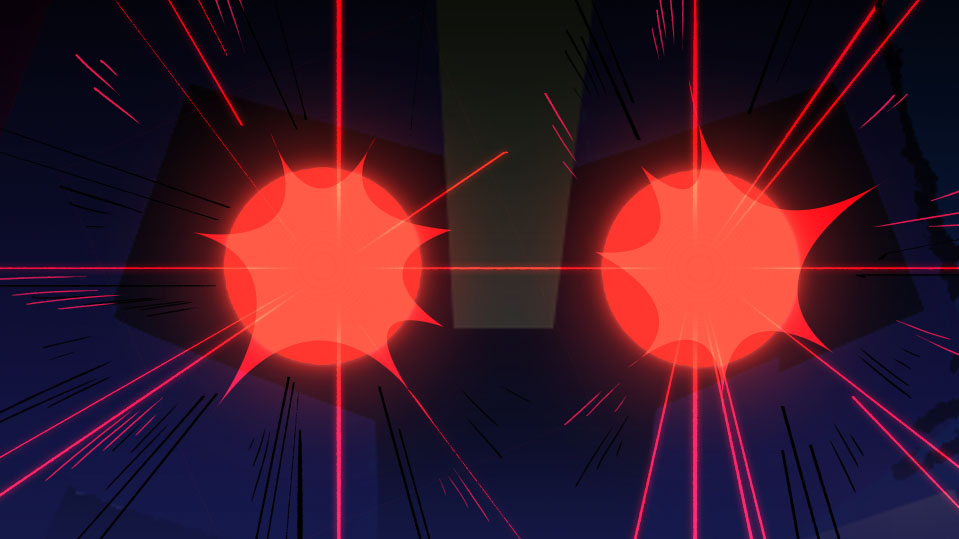 SYLVIA (Art Director): The colorscript also drew inspiration from the Volta-X game, which had a very bold, alert palette with the primary blues and reds. So for the colorscript I wanted to make sure those colors showed and the trailer would seamlessly tie in with the game. The original character designs also had a retro Japanese Anime Kaiju feeling to them so we wanted to emphasize that even more with the different textured lines and manga inspired action burst effects. 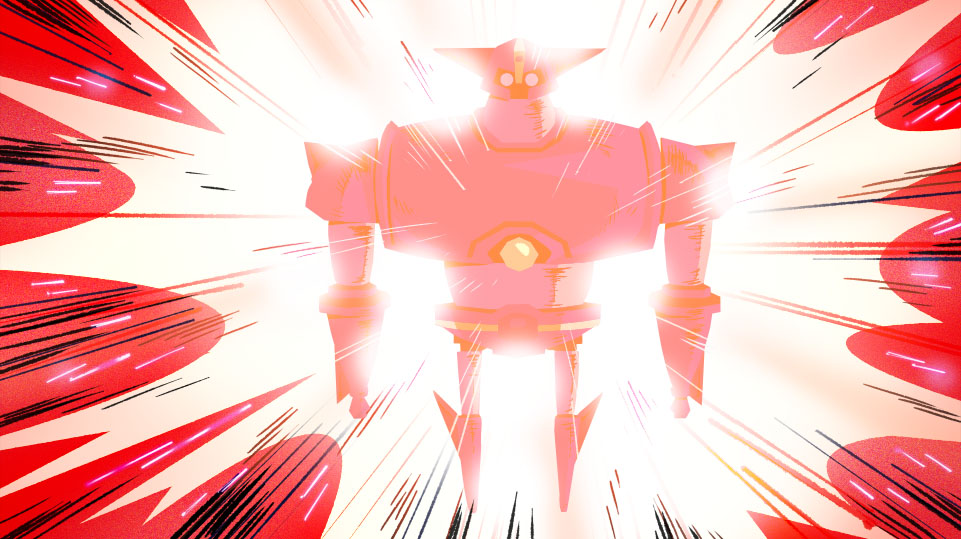 EUSONG: It was important to design the characters to be fun to animate while also carrying design influence from the period references. Even though they are made out of metal, we tried to incorporate roundness in the robot arms, bellies, and legs to give good reason to flex, squash, and stretch. This allows the viewer to really feel the impact and weight. After that, we found every moment to make things feel heavy, like the way missiles are attached to the robot’s shoulder or the way it stretches its hand and arms. At one point, I remember imagining old school wrestling athletes who are strong and heavy but they don’t have chiseled abs or large biceps like American heroes.

TOMMY (Senior Animator): From the start we set out to make this project reminiscent of old anime/Saturday morning cartoons that were often done on the cheap. In order to achieve this look we did animation on 3s, 4s, and 5s so that it had a chunky, limited feel to it. This helped streamline the process because it allowed for us to focus more on the key poses and less on a massive amount of drawings.

On every project we try to assign shots to an animator based on what we think they’re strongest at. Natan Moura is a master of AfterFX so he gets some of the more technically complex shots with lots of moving parts, but he also brings in awesome authentic character animation to it. Someone like Marlène Beaube is an amazing traditional animator, with very strong drawing skills, so they handled most of the action shot posing and camera move shots. I usually just fill in the gaps between the talented people we work with : – )

STÉPHANE (Creative Compositor): Volta-X offered a refreshing opportunity to try things a bit differently. The goal was to reference vintage Kaiju and Giant Robot anime in the way we treated the lines and shadows. It had to be extremely vibrant and feel like a prestigious production from the celluloid era.

After looking at some of the vintage anime references I focused on recreating and interpreting the roughness and dirt that’s typical of old cell animation with imperfect gouache coloring and irregular line work.

I also used this project as an opportunity to further push a technique I developed, allowing sophisticated and volumetric lighting of animated flat 2D elements and characters without needing shadows and rim lights to be hand animated by an animator. Much of this technique is visible in the animation breakdown video below. When you look at the character animation produced for this film, it looks very straightforward, with flat colors and simple line work. I worked with 3 elements for each character; I separated the line work and the color-fill into two passes, and used a third one combining both. I placed the color pass at the bottom and the line work at the top. I roughened the line with “roughen edges”. I used the combined pass as an alpha matte to which I applied a “radial fast blur”. I crushed the alpha level and used it as inverted alpha to apply a colored rim light on one side of the character. I replicated the operation as many times as I needed rims on the character. I sometimes had to animate the source of the radial blur depending on the scene and how the camera and light moved.

The approach on the robots was slightly different. I still applied the same technique as above but I added a few more steps in order to give a subtle “xerox” look to the line work. I created a pre-comp with the same rim and shadow areas but in black and white, on a white background. I applied a noise to it, then used the “Unsharp Mask” to obtain a dark halo around the edges between the shadow and light. Then I used “Extract” to only keep the dark grainy halo and applied a “Roughen Edges” to give the grain a more organic and degraded look.

I used the same pre-comp to generate lines separating the light and the shadow. I applied “Find Edges”, which generated dark lines wherever there were different values next to each other. Then I applied “Extract” to remove the white. I filled with black, and applied “Roughen Edges” to give the line a discontinued and rough look. Then I brought these two pre-comps in the main one and put them between the line and the color layers.

Produced for GungHo
by Chromosphere