My Moon is a short film which tells of the complex relationship between three celestial bodies; Earth, Moon and Sun. Sun grows life, creates color, and provides uplifting energy to life on Earth. It would be impossible for Earth to be herself without Sun. Moon has always been a symbol for emotional extremes such as love, madness, sadness, and magical fantasy. However, Moon does not fulfill as much practical purpose for Earth as Sun does. Hence, to Earth, Sun represents a physical and practical form of love. Moon represents the emotional and platonic form of love.

EUSONG: The story of My Moon follows in the tradition of many romantic stories where a person falls in love with another person who is unable to leave a relationship. In this story however, it is told through an example of this relationship in nature. Moon, who is always watching and hovering around Earth, has predictably fallen in love with her. But Earth is obligated to orbit around Sun, who gives her all of her life and energy. From stereotypes to symbols, there were many interesting relationship dynamics I could play between Sun, Moon, and Earth. I came up with many different types of relationships and types of love between the characters. When a concept brings you so many ideas, I feel that is a good sign you’re onto something positive.

My Moon aims to present a fragile and inevitable balance between different kinds of love. The celestial bodies act as a bigger universal metaphor that the grey areas in complicated relationships that are embedded everywhere – in our love, friendships, lifestyles, ecosystems or even religions. 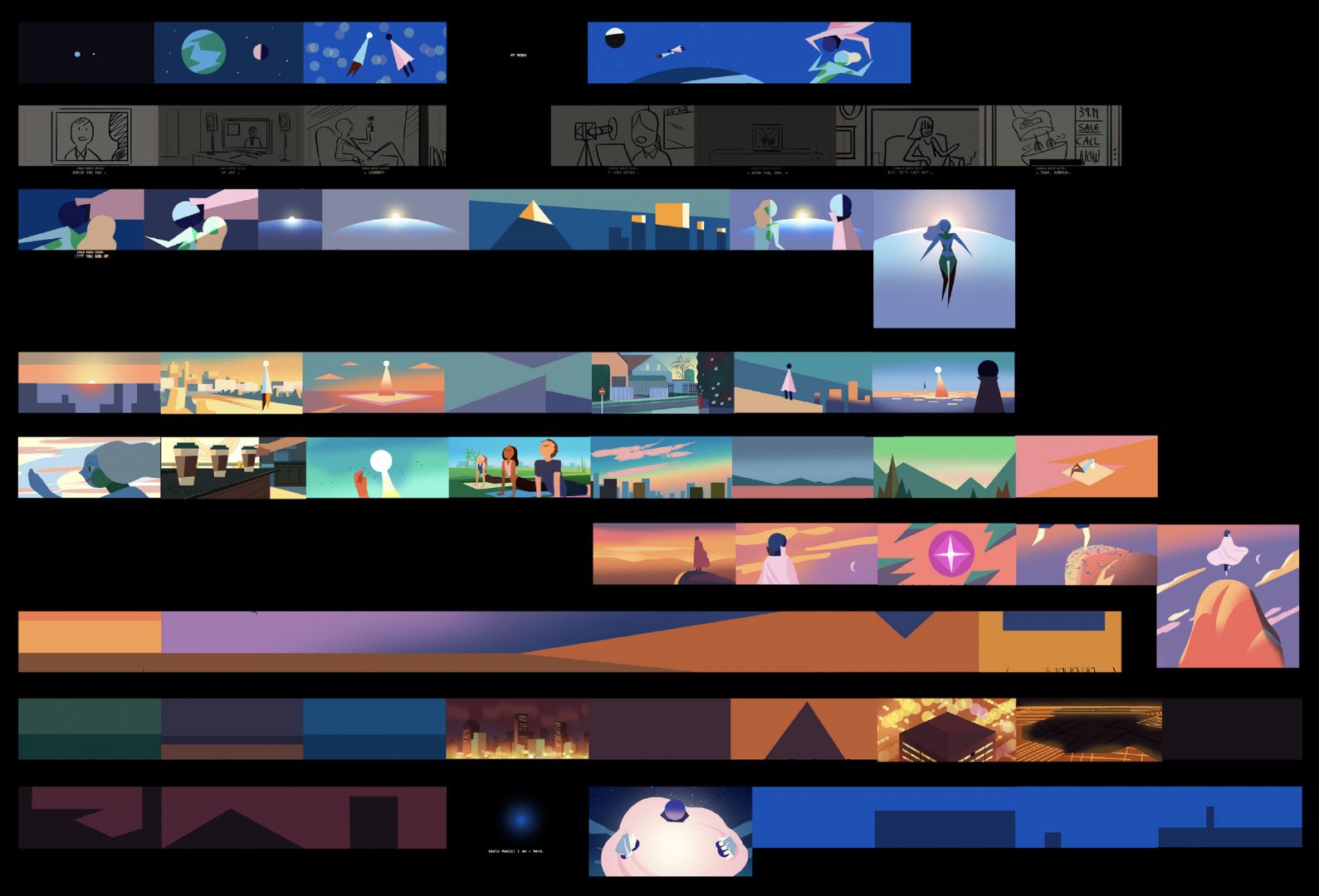 EUSONG: The first idea for the design style was to use textures to mimic certain tactile impressions of materials. I could see using watercolor techniques to capture the amorphous and changing nature of galaxies or clouds. Dry brush textures might fit for tree bark and brick walls. Dense print textures could be used for splashes for rocks. To me, however, using texture can be a double edged sword. It could make everything feel illustrative, which in turn might make everything look flat. Textures can also distract from pure designs, especially when using a graphic style. But if the color or design stays more minimal, I knew it’d make my life easier. So instead of using textures, we planned to use an aspherical lens camera lens effect to give the graphic art more realistic qualities. 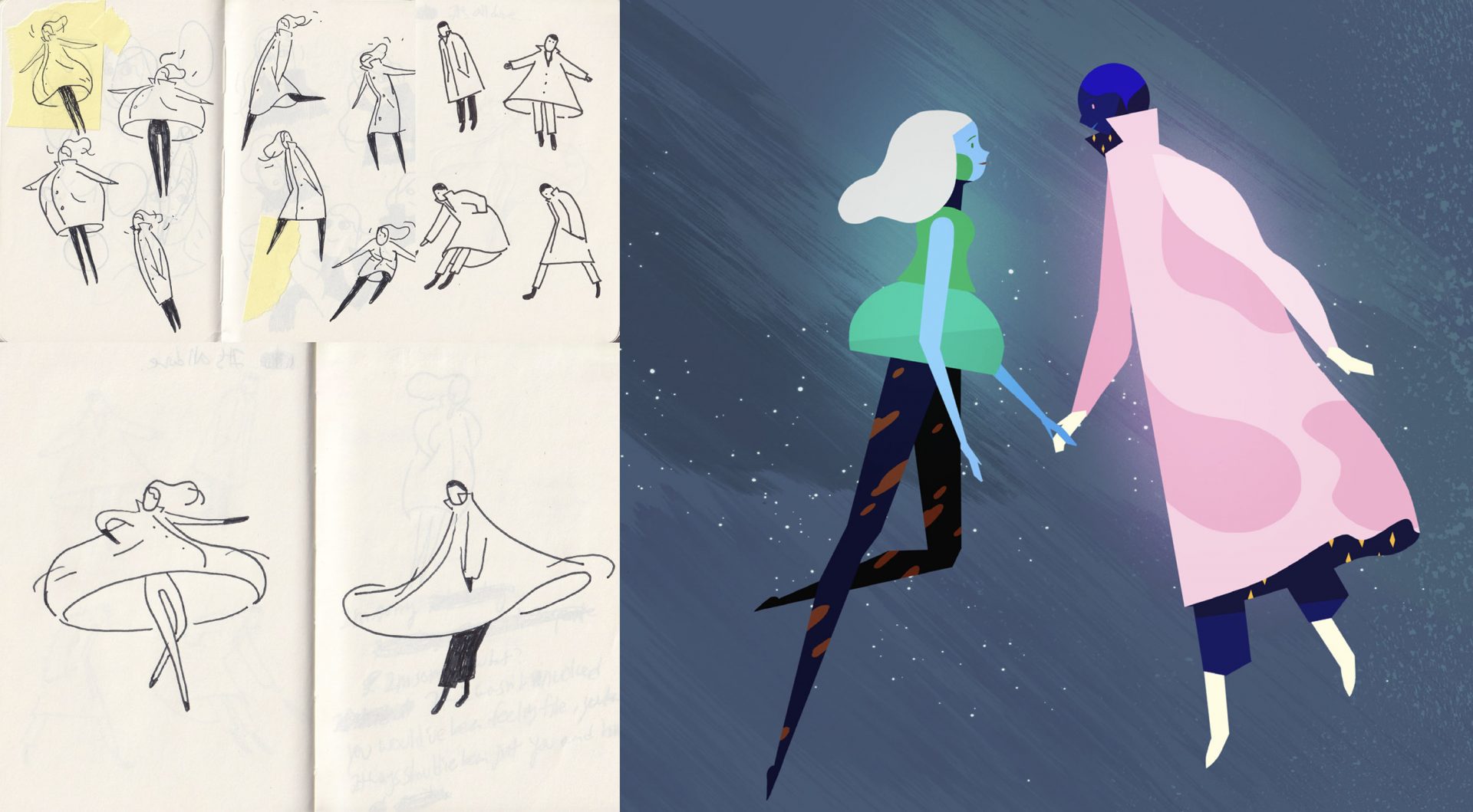 I didn’t want Space to feel so vast that you lose any sense of scale. I wanted it to be vast, but not as deep as a pitch black void. I had multiple layers of stars in the space scenes and on one of the layers were red stars arranged in a grid. It actually helped to give a limited sense of depth and also provided a reference point when the camera panned or trucked. The grid stars were inspired by Karl Friedrich Schinkel’s “The Arrival of the Queen of the Night”, 1815.

^ STILLFRAME OF MOON & EARTH FROM THE FILM

EUSONG: The animation in this film is a mix of traditional keyframing with asset animation that creates an efficient workflow. At the same time, every character had a slightly different pipeline to suit their different needs. The goal was always to simplify the use of software and get rid of the cumbersome processes in between in order to gain efficiency and hit the appropriate style.

Earth is full of emotions which are connected to all of the life inhabiting her surface day and night. For that reason, even though she is a sensitive character who has ups and downs, she has a responsibility to stay in balance.

Moon is somber, dramatic and magical. His intensity and moodiness is part of his nature, so even in his actions, he moves gracefully but quite stiff in his mannerisms. His body is designed in a way that creates a feeling of being closed and veiled. He is minimal in his gestures, and his arms only appear when it’s absolutely necessary.

Sun was completely animated in After Effects. At one point, Natan and I considered building him in 3D because his design is very simple and shape-based. We knew that his animation would be a lot more charming and cartoonier than either Moon or Earth. Even though he is the largest character in size, we wanted him to have lots of squash and stretch. He needed to feel light and floaty, yet not ghostly and still maintaining a weight in his presence.

There are many tools that animation artists have always relied on to create an illusion of life, from subtle character animation to hand drawn effects and detailed background design. While I wanted to keep as much of that purity as possible, I also wanted to explore what we could achieve through the use of modern tools to enhance the look, such as AfterEffects. When Stephane began working on the film, he brought an extra layer of finesse and refinement which added depth and believability to the world. We always wanted to make sure that anything we added would be very unique and help to enhance the style and story, not override them.

WRITTEN AND DIRECTED BY
Eusong Lee